​How it all began - the Fidjrosse church

Within two months of arriving in Benin in 1991, I contracted a serious case of malaria. After testing positive for the mosquito-born virus, I set out walking to the pharmacy a few blocks from our apartment in Cotonou. Upon entering the small pharmacy, I noticed there were three lines and took my place in the line to the left. Sweat ran down my face not only from the effects of the fever and tropical heat, but because I was really nervous, too. In a moment I was going to have to order a cure for malaria in my newly acquired yet deficient language, French. I had consulted my French/English dictionary before leaving the apartment in hopes to get the French medical terms down. The time came, I found myself face to face with the man across the counter...'I knew I should have written those French words down.' There I stood, stammering and stuttering, trying to "parlez-vous français" when the man on the other side of the counter looked at me in pity and asked, "Do you speak English?"--in wonderful English! "Man, do I," was my reply. "Well," he continued, "I speak English, too. What is it that you need?" Relieved, I ordered the medicine in my mother tongue.

The next day our doorbell rang and it was the man who worked at the pharmacy. "Here in Benin," he said, "we have many tropical diseases and sicknesses. When a friend is not well, we visit them to see how things are with them." That visit meant a lot to me and my family. Here we were strangers in a strange land, we virtually knew no one, and this stranger stopped by to check on our well being.

​It wasn't long until I got another case of malaria. I went to the pharmacy and ordered the cure in English...yay! The next day the man stopped by to see how I was doing. He and I became friends and he would come by a couple times a week during the three-hour afternoon break time (in those days most businesses closed for three hours from noon to three). I witnessed to him, regularly showing him from Scripture how he could have eternal life by trusting the resurrected Christ as his Savior.

Again I fell sick with malaria. Again I walked to the pharmacy for the cure. And again the man who worked at the pharmacy came to visit the next day. When I answered the door, I heard those familiar words from him, "I came by to see how you were doing"; only this time he added, "but more importantly I came by today to ask you, when should I become a Christian?" I replied, "Now is the accepted time...now is the day of salvation!" I invited him in and once again showed him God's plan for salvation. How that without Christ we are lost, "dead in our trespasses and sins" (Eph 2:1). We cannot save ourselves because salvation is "not of yourselves: it is the gift of God: Not of works..." (Eph 2:8,9). Jesus died in our place so that we could experience "redemption through his blood, the forgiveness of sins..." (Eph 1:7). I showed this man that if he, with a repentant heart toward God, would by faith receive Jesus as his personal Savior, he would have eternal life, "For by grace are ye saved through faith..." (Eph 2:8). That day, the man from the pharmacy confessed Christ as his Savior. Praise the Lord!

​He and I began studying the Bible together several times a week. At the conclusion of one of our early Bible studies, he said to me, "Pastor Ken, I believe God led you to Benin just so I could get saved and preach the gospel to my own people!" We began pastoral studies. After several months passed, Debbie and I had the privilege of leading his wife to the Lord. The two of them asked if we could start a church at their place. I baptized them both in the world's second-largest baptismal tank, the Atlantic Ocean, and our first French-speaking church in West Africa was born.

The name of the man who got saved that day is Michel Segniho. He is known to many of you as Pastor Michel, the first graduate of our Bible Institute and the long-time pastor of the Fidjrosse church. Pastor Michel has a degree in diplomatic law from the University of Cotonou and speaks nine different languages. God has graciously and greatly used him in the development of our church planting efforts in Benin since 1991. 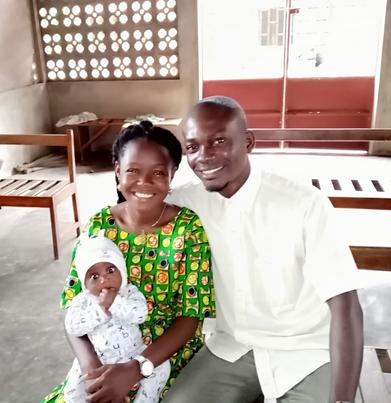 The first slide in the above slide show is a picture of Pastor Michel's family. The baby being held by Alice is their son Brian. I am now teaching Brian, via Skype, Bible Institute classes three days a week. He preaches regularly at the Fidjrosse church. What a blessing!

Brian, Gerardine, and their son Jonathan

Progression of the Fidjrosse Church