This is Tanti Lorri, and I’m back to tell you about what Christmas is like for the kids in Benin.  Christmas is known as The Children’s Holiday, but the Benin kids don’t have Christmas trees or snow — not so close to the Equator!

So what did Christmas look like?  Well, the air was full of sand in December, and it looked like fog.  Sometimes we could barely see across the street!  Some stores had Christmas lights, but there weren’t many.  There was no familiar Christmas music playing, and no one expected much from Père Noël — that’s what they call Santa Claus.  Any gift the children received was small, and it was usually just candy.

To celebrate at our church, I worked with the children to sing Christmas carols and recite the verses in Luke 2 about the story of Jesus’ birth.  Every year we had a children’s performance on Christmas Eve, and my Sunday school students worked very hard for weeks ahead of time to learn their parts.  After the first year’s performance, I discovered that the teens and young adults wanted in on the celebration, and we began having full-length Christmas plays.  I played my guitar to accompany the songs, and when Evie got older, she played for us on her keyboard.

We always managed to give out bags of candy to every child, and I had a Santa hat that I wore when giving out the gifts.  One year, the people from a church in Texas gave us baby dolls to give out to the girls.  They were thrilled to get such a gift!  I tried giving out yoyo’s one year, but then we had to teach the kids how to play with them, because they had never seen one before!

Even though Christmas looks different in Benin, the reason for celebrating it is just the same here as there — Jesus coming to earth to live a sinless life and die for our sins.  He came to save the people in Benin just as much as he came to save us in America!

​​We wish you a Merry Christmas,​

we wish you a Merry Christmas,

we wish you a Merry Christmas, 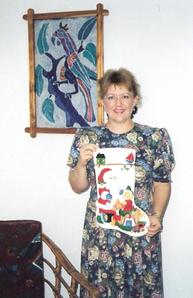 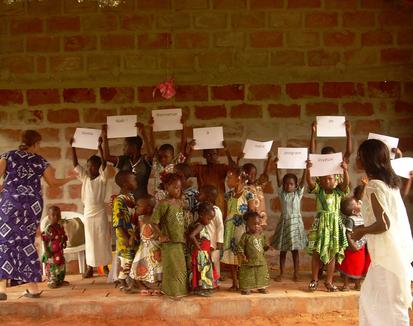