So, he tossed it on the ground and finished the job. 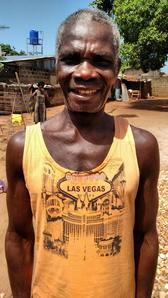 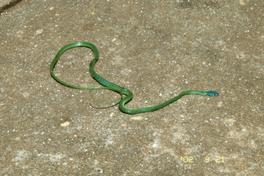 Ota is also a well digger. Above, is the well he dug for one of our village churches. 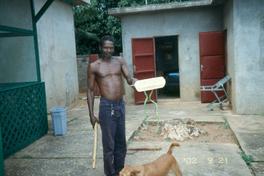 For years we employed two nighttime guards who rotated each evening. Costing us the equivalent of a few dollars a night, the guards were a necessity, not a luxury. As a result, we could sleep while the guard, supposedly, stayed awake at his post. I say “supposedly” because that was not always the case. There were times I would call out the window to the guard in the middle of the night, louder and louder, until he would finally come around the corner of the house, removing the sleep from his eyes. He would look up at the second story window and respond, “Oui Pasteur?” One 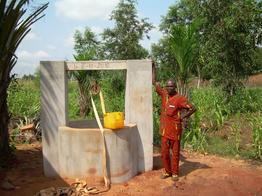 At this point, the snake was still wiggling..."Only mostly dead."

night, about 2:00 AM, I went outside to check on the guard. I found him sitting on two legs of his chair, leaning against the compound ​wall, sound asleep. I called out several times to the unresponsive guard. He finally awakened and immediately stated; “I wasn’t sleeping, Pastor! I wasn’t sleeping, Pastor!” Hibernation tendencies aside, we were blessed to have two really good guards.

The guards also kept the snake population down in our yard. The senior guard’s name was Samuel, or as the local community called him, Ota (O-tah). Ota, in the local language, means, “twin maker.” And that he was, having three sets of them. Early one evening, Ota called me out to the front gate to show me the big fat viper he had just killed in front of our house. Another time he spotted a spitting cobra in the brick pile in the side yard where our kids played. He, along with the other guard, Modeste, came on a Saturday morning to hunt down the snake. We, the family, stood on a mound of dirt about 50 feet away from the brick pile while Ota and Modeste began cautiously removing the bricks from the top to the bottom. Suddenly, when half the bricks had been removed, the Cobra’s head and a quarter of his body came shooting up out of the brick pile. With the same lightning speed, all of us, including the guards, vacated the vicinity. Seeing the snake had disappeared back into the bricks we returned to our stations: the guards to the brick pile and the family to the spectator hill. Within a few minutes the Cobra escaped the brick pile, slithering toward the wall where Modeste terminated it with a hoe. And then there was the day that Samuel (Ota) became our family hero. Debbie was tossing some clothes in the hamper in the bathroom when she discovered a green mamba stretched across the bathroom wall three feet away from her. They call the mamba a two-stepper because if one bites you, you have two steps and it’s over. In actuality, you probably have a couple of hours. Debbie came running to the front window, yelling, “There’s a green mamba in the house!” Ota had just stopped by that morning to say “hi” and he and I were in the front yard talking when the hysterical cry sounded. We came running into the house and Ota clubbed the snake to death.

Ota’s children came to church faithfully. We invited Ota to church, we witnessed to him many times, and we prayed for his salvation for several years. Lorri Herring always put together a great Christmas program and this particular year was no exception. With Ota’s children in the Christmas program, we encouraged him once again to come to church. That day he came. The gospel message was made clear through the children’s Christmas program. At the conclusion of the service I preached a fifteen-minute gospel sermon. The message was presented that Jesus, Immanuel (God with us), was born of a virgin, lived among men, died on the cross for our sins, was buried in the tomb, and rose from the dead on the third day. “Whosoever believeth in him should not perish but have everlasting life.” Of all the people in the service that day, I remember how intently Ota listened to the message. When the invitation to receive Jesus as Savior was given, Ota (the twin maker) was among the first to get saved. Praise the Lord!