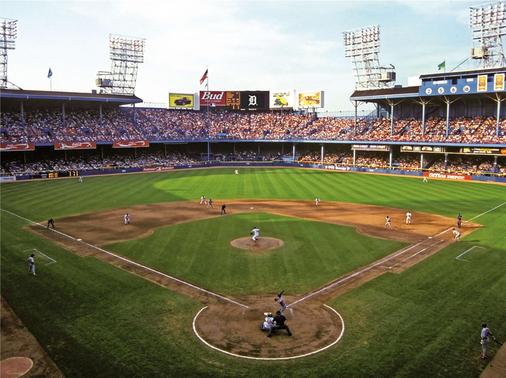 Another memorable moment was the day I played left field for the Detroit Tigers…kinda’.  We loved to get to the ballpark early to watch batting practice.  On one such occasion as we sat in our front row seat against the railing, we were watching the activity of some kids in the center field bleachers section. When a batting practice ball was hit to center, these kids climbed the wire fence, jumped onto the field, grabbed the ball and returned to the bleachers.  My brother, noticing that no one was policing the repeat offenders, said, “Kenny, next time a ball comes to left field, go get it!” (That wasn’t

Tiger Stadium and the Old Tyme Religion
(or)

The day I played left field with the Detroit Tigers.

the first time one of my brothers talked me into doing something stupid.)  No sooner did the line drive leave the bat then I was in flight over the railing en route to the Tiger Stadium left field. With all that adrenaline flowing I had never been so light nor glided so effortlessly nor ran so swiftly in all my life.  I crossed the chalk line into fair territory; I was in left field in Tiger Stadium and in baseball heaven.  The ball was still rolling as I cut right in front of Orlando Pena (a Tiger relief pitcher shagging batting practice balls).  Bare handed, I fielded the ball and returned to my box seat.  The thing my sister remembers most about the incident was the aghast look on Pena’s face watching this 12-year-old beat him to the ball.  The thing a Tiger Stadium usher’s boy remembers most, I suspect, was his dad bringing him a baseball home from work that day.  I had just put my seat back in my seat, heart still racing, when an usher dressed in a green uniform, showed up, took my treasure away from me and not so kindly escorted me, along with my dad, to the security office.

Head of security was going to kick me out of the ball park for my infraction…worst punishment known to a boy Tiger fan.  However, I suspect no lawyer (Perry Mason included) ever waxed so eloquent in a courtroom as my dad did that day in the Tiger Stadium security office.  “How are you going to explain to this boy,” my dad argued my case before the head of security, “why you kicked him out of the ball park, all the while doing nothing about the kids in the center field bleachers, not even sending an usher out there?” My dad rested his case. Security allowed me to return to my seat and watch my Tigers…on the condition that I stay in my seat and off the field.

One thing that certainly can’t be replaced is the Old Book, the Bible.  People spend a lot of time reading.  They read for news.  They read for instruction.  They read for pleasure.  You go to the doctor’s office and reading material is available.  A vast library of news and knowledge is at your fingertips via the Internet.  A person who reads books while in bed is called a librocubicularist.  I’m not sure what the term is for a person who lies in bed reading a Kindle, Nook, or an IPad.  With all the reading material available to us, there is no substitute for the “Old Book,” which is the Word of God.  The Author is Omniscient, and the words are living.  May I encourage you to make time to read God’s Word?  In fact, since we are to put God first in our lives, it would be good to read His Word first thing in the morning.  The Chicago White Socks player-turned evangelist Billy Sunday, used to challenge Christians to pray 15 minutes a day, witness 15 minutes a day and read the Bible 15 minutes a day. People are always looking for something new or some new experience.  When it comes to Christianity we don’t need “new” discoveries.  God gave us all we need for our Christian experience in the “old Book,” the Bible.  For “All scripture is given by inspiration of God, and is profitable for doctrine, for reproof, for correction, for instruction in righteousness.” (2 Timothy 3:16) “Knowing this first, that no prophecy of the scripture is of any private interpretation. For the prophecy came not in old time by the will of man: but holy men of God spake as they were moved by the Holy Ghost.” (2 Peter 1:20, 21) Give me the old Book of the Old Tyme Religion. 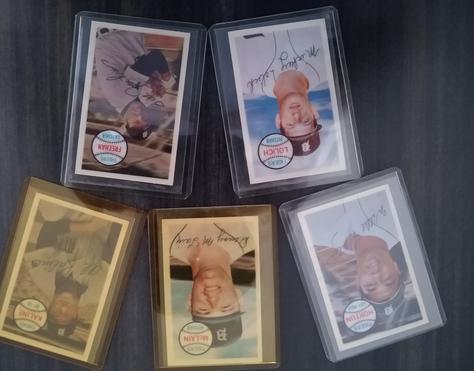 line in the first row against the railing just beyond the Tiger bullpen.  My mind is chock-full of memories of old Tiger Stadium.  I remember how Jim Hunter endeared me to follow his Hall of Fame trek.  It was 1967, the Kansas City Athletics, sporting their colorful yellow and green uniforms, were in town.  Hunter and Lindblad, for the A’s, were running laps from right to left field during pregame warm-ups.  As Hunter neared the left field line, he heard a little kid from the crowd shout, “Hey Hunter, where’d ya get the clown outfit?”  The young pitcher could have responded to me in a negative manner.  Instead, mimicking a clown, he turned and headed back toward right field, making a swimming motion with his arms as he ran.  Instantly, Jim “Catfish” Hunter became my favorite ball player.

As a Tigers fan, I like many boys my age, went to bed with a transistor radio. We tuned into WJR to hear Ernie Harwell give play by play on game day.

Some of my fondest memories growing up north of Detroit were going down to Tiger Stadium, Briggs Stadium as my dad called it, several times every year, to watch the “Boys of Summer” play ball. We often sat down the left field