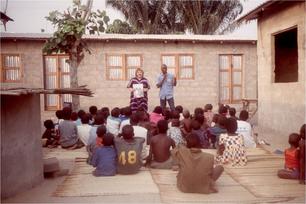 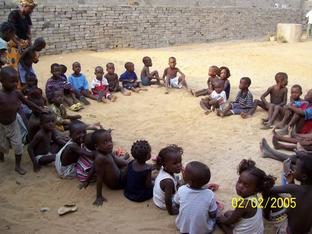 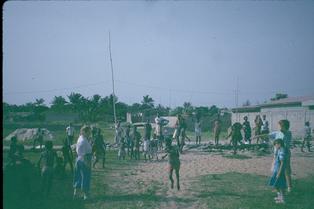 Antoine was burdened for his uncle’s salvation. After a Sunday morning service at the Fidjrosse church, Antoine told Pastor Michel and me about his uncle Eugene who was dying of kidney failure and needed to be saved. He asked if I would go and visit him and pray for him. He told us that his uncle had been a successful builder (building several of the large office buildings throughout the city of Cotonou. Eugene traveled twice a week to Lomé, Togo, for kidney dialysis, about a three-hour trip. The following Wednesday morning, Pastor Michel, Debbie, and I went to Eugene’s home to have prayer with him and talk to him about the Lord.

Upon arrival, we were greeted by Eugene and about 12 adult members of his extended family. After our greetings, Eugene and family sat on benches lined against the outside of the house. They seated the three of us on chairs facing them. I told Eugene that Antoine informed me of his dire physical condition and that he asked me to pray for him. I went on: “Eugene, we would like to pray with you. But, before I pray for your physical condition, may I talk to you about your spiritual condition?” He replied, “Bien sur,” “Of course!”

Over the next thirty minutes, Eugene and his relatives listened intently as the gospel was presented. In conclusion, I reviewed that all are sinners (Romans 3:23, 10:9), the penalty for sin is death (Romans 6:23), Jesus died for our sins and rose from the dead (Romans 5:8, 10:9), and if you accept Him as Savior He will save you (Romans 10:13). I then asked Eugene, “Would you like to receive Jesus as your personal Savior?” Eugene looked down the line of family to his left, then to the right, looked back at me and said, “Well, who wouldn’t?” Everyone, Eugene and all sitting beside him, were saved that day. Praise the Lord!

After calling upon Jesus, Eugene lifted his bowed head and said to me, “Pastor, I want to thank you for coming here today, and I want to explain to you why these relatives are here. I am sick, and I am dying. I have spent most of my money trying to get better. I go to Togo twice a week for kidney dialysis. I am waiting for a kidney that will probably never come. I have done everything I know to do to try and get well except one thing. And that is why I asked these relatives to come here today.” He went on to explain how he summoned these relatives to go with him to see the voodoo witchdoctor that very day so that he could give his “soul to the devil” (his exact words) in hopes that that would heal him. He continued, “But now I’ve given my soul to Jesus and if I’m healed, thank God, and if not then I’ll be in heaven that much sooner.” Then Eugene asked me, “Will you teach my children the word of God?” With joyful heart I agreed to honor his request.

Weekly we taught Eugene’s children the Bible, out in the courtyard of the home. Within a few weeks, Lorri, our co-worker, enthusiastically took on this ministry. The crowd in the courtyard grew as Eugene’s children invited their friends. In addition to the Bible lesson, Lorri added activities such as jump the creek for the older children and duck duck goose for the younger children. The crowd got so big that they had to start meeting in the school yard across the street from Eugene’s. Over the years, hundreds of children attended this weekly Bible time. Many, many children were saved because of this ministry. These children came from families of various religions. Voodoo and Muslim children, who would never be allowed to attend church, came to our children’s Bible time and got saved. And it all started because Eugene, who was terminally ill, received Jesus as Savior and wanted his children to learn about God.

What about Eugene? Physically, Eugene couldn’t go to church. Each week I went to his house to have a Bible study with him. Most of the time he lay on the cement floor in discomfort…the cement would help cool his body from the African heat. But he looked forward to our coming each week. He regularly invited friends to come to the Bible study, and many were saved as a result. For months I studied the Bible with Eugene, and for months he made the difficult trip to Togo for kidney treatment. Then one day, God looked upon Eugene in mercy and compassion and said, “Eugene, you don’t have to go to Togo anymore for treatment--you just come on home with Me.” And this man, whose sickness was used for the salvation of untold many, went to his home in heaven. Romans 8:28

​I think this guy won. 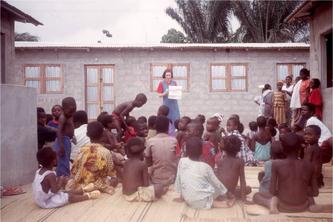 Teaching the Bible lesson is Evie at age 16.

Bible lessons were taught with an evangelistic emphasis. An invitation to receive Christ was given each week. 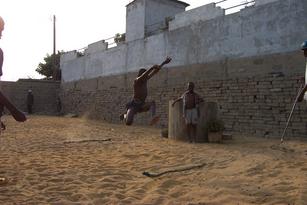 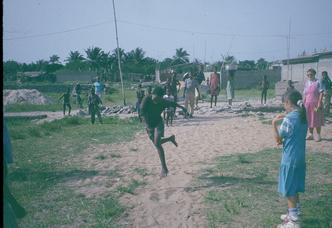 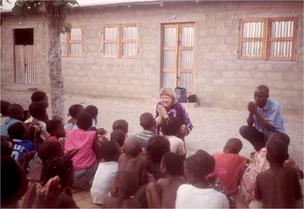 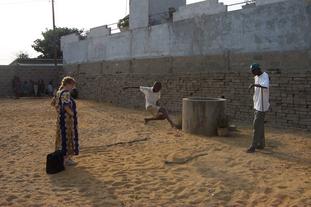 Assisting in Bible Club is Evie (blue dress), she was 9 in this picture.

Each week, Lorri would begin the Kid's Bible Club with game competitions. Kids passing by would see the excitement and eagerly join in the fun.